BACK TO GLOSSARY
>
sociocracy

Sociocracy is a method of dynamic governance, theorized by Kees Boeke in the late 1940s as an alternative to the traditional pyramidal organization with its rigid hierarchy and top-down decision-making system.

Built around a number of essential principles like absolute transparency and fair remuneration, sociocracy is articulated around four fundamental pillars:

Consent is at the heart of the decision making process of a sociocratic organization.

Consent decision making means that decisions are only taken when no further relevant objections are raised against them.

It is different from consensus, where everyone in the group needs to agree.

Dialogues and discussions within the sociocratic circle (or department circle) make it possible to overcome these objections until a decision is unanimously not rejected by any circle member.

It would obviously be inconceivable that all decisions would be subject to such a protocol, particularly for the day-to-day affairs of the company.

However, it is precisely by consent that it is determined which decisions fall outside this rule, to whom they are entrusted, within what limits, and for how long.

The principle of building an organizational structure in circles is the second fundamental rule of sociocracy.

These circles, designed as decision-making structures, are aligned with the company's functional structure.

Each area of operation has a circle corresponding to it.

These circles are interconnected and apply the rule of consent for their internal administration: definition of their own mission, their objectives...

Each circle is finally responsible for the implementation of the objectives that are established for it by the higher circle.

The double link is the rule that guarantees the good complementarity of the circles between them.

Each one is connected by two people to the circle directly above him.

Both belong fully to the two circles:

Finally, sociocracy has established election without a candidate as one of its fundamental rules.

When it comes to choosing a person to hold a position, a Circle precisely makes a designation rather than have an election.

The absence of a candidate, open discussion, and consent on the final choice, are the pillars that guarantee the general approval of the circle on the legitimacy of the designated person. 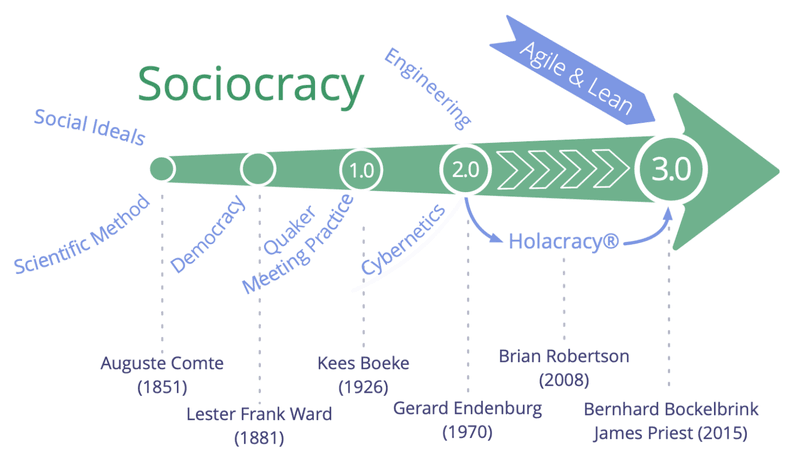 What is Sociocracy? Introducing a Toolkit for Agile Organizations

Dealing with Salaries in a Flat Organization: Testimonial by Mein Grundeinkommen

Camille Gindre visits Berlin to pay Mein Grundeinkommen a visit. They chat all things salary and transparency. Read their testimonial!